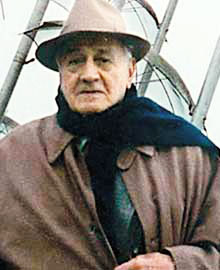 George Zongolopoulos (1903-2004) was a sculptor. George Zongolopoulos was never interested in publicity. His sole concern during his long and productive life was to be able to create on his own terms. He was still making sculptures at the age of 90.

Zongolopoulos was particularly concerned that his sculptures should co-exist harmoniously with their environment so he frequently collaborated with architects. In the last period of his work, since 1972 the element of motion has remained a fundamental feature of a number of his compositions along with the additional water and sound. His basic sculpting material is stainless metal in a variety of forms combined with objects such as lenses, umbrellas, pipes and rods.

He was born in Athens in 1903. He studied sculpture in the Athens school of Fine Arts with T. Thomopoulos as his teacher (1924-1930). In 1937 he traveled to Paris where he studied and familiarized himself with the work of Ch. Despiau. He studied works of Romanesque, Gothic and contemporary sculpture.

Between 1926 and 1927, he worked in the Department of Restoration of Ancient and Byzantine Monuments for the Ministry of Education. Nevertheless, his interest was not restricted to sculpture. On the contrary, he also engaged in painting and architecture. He worked in the Architectural Department of the Ministry of Education from 1930 to 1940. In that period he designed and built school buildings and churches. In that same period he met and later on married (1936) the painter Eleni Paschalidou.

In the years 1949 and 1950 he worked in the atelier of the sculptor Marcel Gimond in Paris with a scholarship granted by the French Government.

From 1952 to 1953, after having been granted a scholarship by the Greek State Scholarships Foundation, he went to Italy where he studied bronze-casting techniques(Fonderia Nicci, Rome and Fonderia Domeniccini, Pistoia). He studied the sculpture of the renaissance in Florence and Padova, as well as the work of Michelangelo, Pisano, Donatello, Manzoni, Manzu, Marini, Pomodoro and the Etruscan Art.

Zongolopoulos creatively followed all the artistic transformations of the 20th century. He became acquainted with the prominent artists and architects of his time and contributed to the creation of a dialogue on art. He was extremely interested in the location of his sculptures and their interaction with their surroundings and once claimed, “You are dead when you give in to the established sense of aesthetics and the lack of difference.”

He remained active well into his older years, maintaining the enthusiasm of a teenager and the profound politeness for which he was known.

In February 2004 the sculptor established the public welfare George Zongolopoulos Foundation located in his home-atelier. He died on 11th May of the same year. 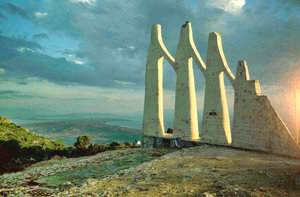 In 1936 his works appeared for the first time in a gallery in Athens. Since then he has held a considerable number of solo exhibitions, participated in group exhibitions and received several distinctions not only in Greece but all over the world. He has had many award winning competition entries and commissions.

Works of his can be found in many Greek foreign collections, such as: