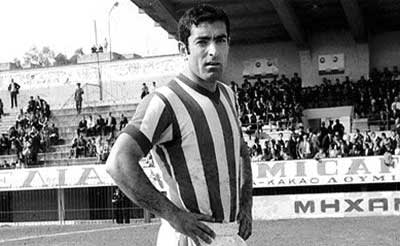 Giorgos Sideris (born in 1938) was considered by many to be a football player like no other! An inside-right forward that no-one or nothing could stand in his way (his nickname was "the Bulldozer"). Very quick with the ball on his feet and a player that had the instinct and charisma to score. He had a very bright career with Olympiakos (came from Atromitos Piraeus FC in 1958) for whom he scored 224 goals.

On February 6, 1972, Giorgos Sideris rejoined Olympiakos (in a match against Panachaiki, 3-2) after his return from Belgium where he played for Antwerp (1971). He was the first post-WW II Greek player to play for another European team outside Greece.

Two weeks later, on February 20, 1972, he played his last game against Panathinaikos at Karaiskaki Stadium (0-0). After his football career ended, Sideris established a successful insurance company.

On November 15, 2007, Sideris made headlines when he was shot in the left arm by unknown assailants.