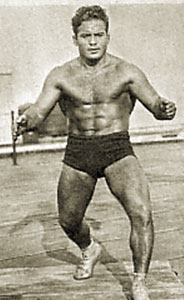 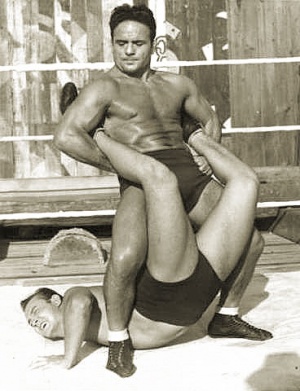 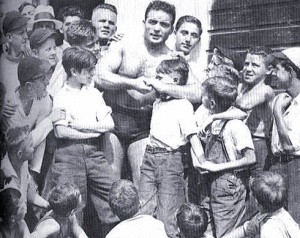 Jim Londos showing a move to his young fans 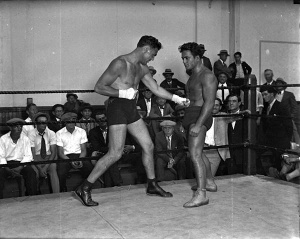 Standing just 5’8” and weighing only 200 pounds, "The Golden Greek," Jim Londos (real name Christopher Theophelus), was not an imposing figure; but he would become one of the greatest World Champions of all-time, reigning as Professional Wrestling’s first major drawing card while also becoming one of America’s most famous athletes.

Christopher Theophelus was born on January 2, 1897 in Koutsopodi, a village near Argos, Greece. A strong athlete as a youth, his mother wanted him to become a priest while his father, who was once a top amateur wrestler, pushed him to be a soldier. At age 13, Theophelus ran away from home and soon immigrated to the United States, where he worked as an electrician and a grocer-boy. He eventually joined a circus, where he performed in an acrobatics act; and it was here where he was first exposed to the wrestling circles. He began to compete in amateur wrestling contests before ultimately making his debut in the professional ranks in the late 1910s. Throughout World War I, he toured the West Coast, where he performed the gimmick of “Chris Theophelus, the Wrestling Plasterer,” dressing in working clothes, and sporting shoes daubed with property plaster. Eventually, he would receive the Londos name from Portland sports editor Roscoe Fawcett after he wrestled a match amid a dense “London” fog.

Due to his relatively small stature, Jim Londos was initially not considered as championship material; however, he capitalized on his handsome looks and physique by matching himself against the ugliest opponents he could find. This “Beauty vs. the Beast” strategy enabled Londos to become one of the sport’s most popular contenders, as “the Golden Greek” thus became wrestling’s first major sex symbol among female fans. Consequently, Londos gradually worked his way up the ladder into a credible contender, often serving as a popular challenger to the two dominant wrestling champions of the time, Joe Stecher and Ed “Strangler” Lewis. As a result, Londos subsequently challenged (and was defeated by) Lewis on seven different occasions during the 1920s.

By the end of the decade, Jim Londos returned to the East Coast, where he wrestled under promoter Jack Curley’s group, which also included such industry powers as Toots Mondt, Ray Fabiani, Rudy Miller, and Jack Pfeffer. Curley then pushed Londos and German wrestler Dick Shikat as his two premier contenders; and on January 4, 1929, Lewis finally dropped the World Title to a small, non-wrestler named Gus Sonnenberg, who was popular as a result of his innovative wrestling style and football background. However, Sonnenberg was controlled by Lewis’ group, and he refused to defend his title against Curley’s “legit” wrestlers. As a result, Curley was able to get the wrestling arm of the National Boxing Association to strip Sonnenberg of his title claim in New York and Pennsylvania; and on August 23, 1929, Shikat became the NBA’s recognized World Champion by defeating Londos in Philadelphia. However, it soon became evident to Curley and his partners that Jim Londos was clearly their most popular drawing card; and in a rematch on June 6, 1930, Londos beat Shikat to capture the World Championship.

With Ed White serving as his manager, Jim Londos would go on to become one of the most successful wrestling champions of all-time, regularly drawing crowds of over 20,000 fans to Madison Square Garden (which, on a consistent basis, had previously been unheard of for pro wrestling). Londos thus became the centerpiece star of Jack Curley’s New York territory while defending his title against the likes of Shikat, Jim Browning, and Earl McCready. Curley then built up a big-time matchup between Londos and top challenger Ray Steele, with New York newspapers covering the participants’ training camps in the upstate mountains. The two men finally squared off in an epic encounter on June 30, 1931 in front of 40,000 fans at Yankee Stadium, with Londos retaining his title after 69 minutes of furious action. Later that year, Londos also sold out Toronto’s Maple Leaf Gardens when he defeated George Zaharias.

However, a contractual dispute developed in early 1932 between White and Toots Mondt; and Londos was subsequently chased out of the New York region when Mondt recruited Strangler Lewis back to the area. As the sport’s top drawing card, Londos continued to be recognized as champion in most territories, and he competed under the promotion of Charlie & Willie Johnson, which was also backed by Midwest promoter Tom Packs, while defending the title in such major cities as Chicago, Philadelphia, Los Angeles, Toronto, and St. Louis. Meanwhile, the New York territory plummeted after Londos’ exit, as the fans rejected a past-his-prime and out-of-shape Ed Lewis, who at this point, was unable to draw anywhere near Londos’ level. As a result, Jack Curley’s New York empire crumbled (and it would be years until the territory was revived as a wrestling hotbed under Vince McMahon Sr.); so he thus brokered an alliance with Packs and other promoters to form a new wrestling “Trust,” which would share profits evenly across all the major North American territories (and eventually served as a precursor to the formation of the NWA in 1948). As a testament to his drawing power, Jim Londos was subsequently given a $50,000 cash bond that ensured his position to serve as the Trust’s reigning World Heavyweight Champion.

In 1934, Jim Londos returned to his native Greece as a national hero, and he reconciled with his father before defeating Russian champion Kola Kowriani in front of 100,000 fans (with an additional 50,000 turned away) at Athens’ Olympic Stadium. Afterwards, Londos was then bestowed the Gold Cross of Phoenix from Greece’s King Paul. Later that year, Londos finally defeated his longtime nemesis, Ed “Strangler” Lewis, who put over the younger champion in a famous showdown before over 35,000 fans at Chicago’s Wrigley Field on September 20, 1934. On June 6, 1937, Londos then defeated NFL Hall of Famer-turned-wrestler Bronco Nagurski to unify the NBA, New York State Athletic Commission, and American Wrestling Association (Boston) titles to become the undisputed wrestling champion among all eastern promoters.

Besides being recognized as a solid wrestler, Londos was credited with being a real draw for female wrestling fans – which led to his Greek Adonis label in the press. A wily aspect of this title was that Ed White, Londos’s manager throughout his years of glory, initially sought out the ugliest wrestlers possible for the Greek to wrestle. Billed as “The Man With The Million Dollar Body,” Londos was romantically linked in one newspaper account after another with starlets and high-society ingénues. Scrapbooks of Londos’s career are filled with full-page pictorial fluff pieces about the champion trying on hats or discussing his favorite authors. All this, and numerous cartoons about “Jemmy,” abounded on sports pages throughout the 1930s and 1940s.

On the road to retirement

Londos’s life was not all wrestling ugly, brutal men. Just before his retirement, he married Avra C. Rochwite (1912-1998), who was born in Clayton, Montana. At the time of their marriage, Rochwite was described in press reports as a “St. Louis Aviatrix.” The couple had three daughters: Diana, Demetra, and Christina.

Jim Londos finally retired from pro wrestling in 1946 after serving as the World Champion for the previous 16 years. Hailed for his superior conditioning and notable work ethic, he wrestled in some 2,500 matches between 1930-46, easily drawing more money than any other star of his era. He donated large sums to the Greek orphans of World War II, and he remained highly active with philanthropic efforts throughout the rest of his life (and in 1970, he was cited by President Richard Nixon for his benefit work). Jim Londos died at age 78 on August 19, 1975 of a heart attack, but the Golden Greek had long before cemented his place as the industry’s top star during the difficult years of the Great Depression. He is one of the Professional Wrestling’s most important pioneers.