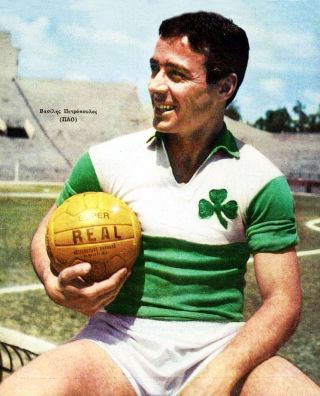 Vasilis "Lakis" Petropoulos was a midfielder for Panathinaikos during the 1950s.

He was born on August 29, 1932. During his career, Petropoulos was capped 3 times by the National Football Team of Greece.

After his playing days were over, he became a successful coach for:

As a coach he won more Greek League championships than any other coach - 5.

Petropoulos died on June 30, 1996 while on a tour of the US with other veteran football players.

Lakis Petropoulos was the star of the 1956 Greek film "Οι άσσοι των γηπέδων μας" - "The stars of our football stadia". His co-stars included Andreas Mouratis and Costas Linoxilakis.