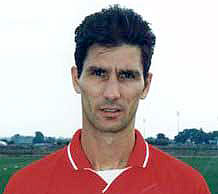 Marinos Ouzounidis is a former Greek football player who is currently a coach.

Born in Alexandroupolis, Thrace, on October 10, 1968, Ouzounidis started his football career with SKODA Xanthi. His first appearance in a A' Division game was on September 21, 1986. He was later acquired by Panathinaikos (1992-1998) and later by French side Le Havre (1998-99). Afterwards, he returned to Greece to play for Paniliakos.

He recently coached APOEL Nicosia, resigning on January 6, 2008, after a home defeat against Anorthosis Famagusta. He coached AE Larisa FC in the 2009 and 2010 seasons but was forced to resign after a home defeat to Panthrakikos. In 2010, he became the coach of Iraklis Thessaloniki. The following year he returned to SKODA Xanthi as a coach. Ouzounidis went on to work for Platanias FC, Ergotelis and Panionios before returning to Panathinaikos (2016 - 2018). In 2018, he was selected to coach champions AEK.