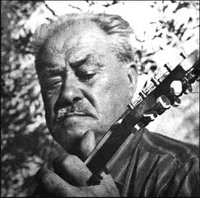 Markos Vamvakaris,(May 10, 1905 in Ano Chora in Syros - February 8, 1972) (Greek: Μάρκος Βαμβακάρης), one of the Greece’s most popular and respected musicians of rebetika, a genre that arose from the byzantine-rooted music of the refugees of Asia Minor and represented the underground in a manner similar to that of blues in the USA. He was one of the Tetras, the Legends of Piraeus group of musicians, and is generally accredited as being the grandfather of rebetiko, and pioneer of the bouzouki in popular music.

Markos Vamvakaris was born on May 10, 1905 in Ano Chora in Syros and was raised by a Catholic family.

At the age of 12, Vamvakaris left from Syros to Piraeus. He worked as a stevedore, employee at a pit-coal mine, polisher, paperman, and two others. He learned bouzouki and began to write music.

In 1934, Vamvakaris' first record was produced, Na 'Rchosouna Re Magka Mou (Να 'ρχόσουνα ρε μάγκα ). In the period shortly before Second World War, he wrote "Frangosyriani" (Φραγγοσυριανή), which was so popular that it consolidated his fame and made him a respected musician.

During the 1950s, initiatives from Tsitsanis, saw old and new songs by Vamvakaris being produced and reproduced, often sung by famous artists including Grigoris Bithikotsis, Stratos Dionysiou, etc. During this time, Vamvakaris' popularity, and the general popularity and acceptability of rebetiko had greatly increased, with a new middle-class audience, which previously shunned the outcast genre. Vamvakaris died on February 8, 1972 at the age of 67.

Greece’s most innovative post-war songwriters — including Manos Hadjidakis, Mikis Theodorakis, Manos Loizos, Stavros Xarchakos and Christos Leontis — have all credited Markos as having influenced their work greatly. Yet, Markos remained a humble giant until the very end.