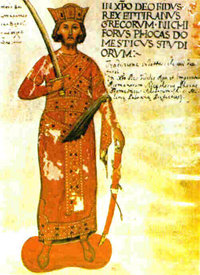 Nicephorus II Phocas (Greek Νικηφόρος Φωκάς) was one of the most brilliant generals in the history of Byzantium who rose to become a mediocre emperor from 963 until his assassination in 969. An inscription carved out on the side of his tomb reads: "You conquered all but a woman".

Nicephorus belonged to a Cappadocian family which had produced several distinguished generals. He was born about 912, joined the army at an early age, and, under Constantine VII, became commander on the eastern frontier. In the war with the Saracens he began with a severe defeat (956), which he retrieved in the years following by victories in Syria.

In 960 he led an expedition to Crete, stormed Candia after a ten months' siege, and wrested the whole island from the Saracens. After receiving the unusual honours of a triumph, he returned to the east with a large and well-equipped army. In the campaigns of 962-963 by brilliant strategy he forced his way through Cilicia into Syria and captured Aleppo, but made no permanent conquests. It was on these campaigns he earned the sobriquet "The Pale Death of the Saracens."

Upon the death of Romanus II, he returned to Constantinople to defend himself against the intrigues of the minister Joseph Bringas. With the help of the regent Theophano and the patriarch, he received supreme command of the eastern forces, and being proclaimed emperor by these marched upon the capital, where meanwhile his partisans had overthrown his enemy Bringas. Thanks to his popularity with the army, Nicephorus was crowned emperor by the side of Romanus's infant sons, and in spite of the patriarch's opposition married their mother, the regent Theophano.

During his reign he continued to wage numerous wars. From 964-966 he definitely conquered Cilicia and again overran Mesopotamia and Syria, while the patrician Nicetas recovered Cyprus. In 968 he reduced most of the fortresses in Syria, and after the fall of Antioch and Aleppo (969), which were recaptured by his lieutenants, secured his conquests by a peace. On his northern frontier he began a war against the Bulgars, to whom the Byzantines had of late been paying tribute (967), and by instigating an attack from Svyatoslav I of Kiev, distracted their attention effectively. Nicephorus was less successful in his western wars. After renouncing his tribute to the Fatimid caliphs, he sent an expedition to Sicily under Nicetas (964—965), but was forced by defeats on land and sea to evacuate that island completely. In 967 he made peace with the Saracens of Kairawan and turned to defend himself against their common enemy, Otto I, who had proclaimed himself Western emperor and attacked the Byzantine possessions in Italy; but after some initial successes his generals were defeated and driven back upon the southern coast.

Owing to the care which he lavished upon the proper maintenance of the army, Nicephorus was compelled to exercise rigid economy in other departments. He retrenched the court largesses and curtailed the immunities of the clergy, and although himself of an ascetic disposition forbade the foundation of new monasteries.

By his heavy imposts and the debasement of the coinage he forfeited his popularity with the rest of the community, and gave rise to riots. Last of all, he was forsaken by his wife, and, in consequence of a conspiracy which she headed with his nephew and her lover John I Tzimisces, was assassinated in his sleeping apartment.

Nicephorus was the author of an extant treatise on military tactics which contains valuable information concerning the art of war in his time.