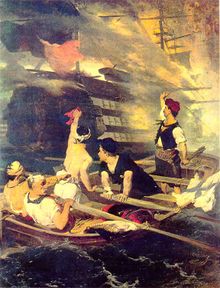 The blowing up of the Turkish flagship by Kanaris, 143x109 cm. Averoff Gallery 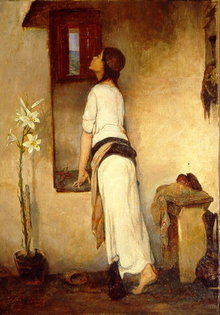 Lytras was born in Pyrgos, Tinos in 1832. He studied in the Athens School of Art from 1850 until 1860 and received a state scholarship for further studies at the Munich Academy.

At the Munich Academy, he was accepted into the class of Karl von Piloty after managing to pass the German professor's stringent requirements. Lytras' scholarship came to an abrupt end in 1862 after the overthrow of King Otto. The young artist returned to Greece and, in 1866, became a professor at the Athens School of Fine Arts. It was at about this time that Lytras slowly passed from history to genre painting.

In 1873, Lytras along with his friend Nikolaos Gyzis toured Asia Minor. In 1874 the two painters moved to Munich. Gyzis stayed, Lytras returned to Greece within a year.

Nikiforos Lytras retained his post at the Athens School of Fine Arts until 1904 - the year of his death. He died on June 14 of that year, after a brief illness reportedly caused by inhalation of toxic fumes from the chemicals in his paints. He was succeeded at his post by one of his students: Georgios Iakovidis. 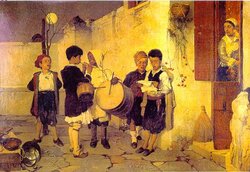