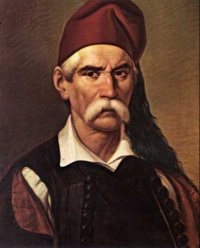 Nikitas Stamatelopoulos, better known as "Nikitaras", was a Greek revolutionary and hero of the War of Independence of 1821.

Before the Greek Revolution, Nikitaras was a klepht, in a band led by his uncle Theodoros Kolokotronis. When the Revolution broke out, on March 25, 1821, Nikitaras took part in many a battle (Doliana, Valtetsi, Dervenakia and the Siege of Tripolis. He became famous for his bravery and also his honesty as he would refuse to take any booty after a battle.

Nikitaras also fought in Rumeli alongside Georgios Karaiskakis. In the infighting that threatened the Greek Revolution, he sided with no one but sought to reconsile the two sides.

His bravery made him the subject of several songs and poems where he was hailed as a new "Leonidas", a new "Achilles" and "The destroyer of the Turks" and earned him his nickname "Nikitaras" (great Nikitas) with which he is better known today.

After the war, Nikitaras became an advocate for the rights of those who fought in the Revolution. However, his dislike for the Bavarian control of the newly-independent Greek state earned him many enemies and he ended up in prison as a conspirator against King Otto. He was vindicated in 1841 but his health had been seriously affected and he died on September 25, 1849 in Piraeus.