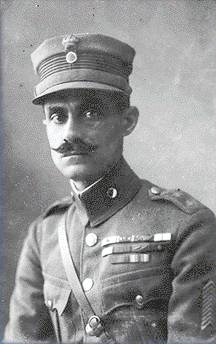 Nikolaos Plastiras (Greek: Νικόλαος Πλαστήρας) (November 4, 1883 - July 26, 1953) was a general of the Greek army. He is known as "O Mavros Cavalares" ("The Black Horseman"). He was born in 1883, in Karditsa, Greece. His parents came from Morfovouni (formerly Vounesi), a village in the Agrafa region which is located in the northwestern part of Thessaly in mainland Greece.

In 1919, Plastiras commanded the 5/42 Evzones Regiment in Ukraine as part of an Allied force aiding the White Army in their ultimately unsuccessful fight against the Red Army. His force was then transferred to Smyrna in Asia Minor via a port in Romania.

During the botched war with Turkey from 1921-1923, General Plastiras was responsible for arresting the Greek army's retreat and stabilising the front in Thrace along the Evros River. His stance is considered heroic since it helped save the lives of large masses of Anatolian Greeks.

The Turks called Plastiras Kara Biber ("The Black Pepper"), while the 5/42 Evzones were known as the Seytan Asker ("Satan's Army"). His advance was finally halted at Kale-Grotso, just across the river Sakarya. Soon after, at the battle of Battle of Sakarya, the Greeks were forced to begin their retreat.

After the war he had six royalist generals and politicians who were held responsible for the defeat court-marshalled - among them Prime Minister Dimitrios Gounaris - and executed. Plastiras also forced Greece's King Constantine I to leave the country in 1923. Plastiras help to lay the groundwork for the 1st Hellenic Republic. These actions gave him widespread fame for being one of the few republican officers in the Greek army.

General Plastiras was even admired by his greatest enemy, Mustafa Kemal (Ataturk). At the end of the war, negotiations took place regarding the exchange of peoples between Greece and the newly formed Republic of Turkey. Ataturk is quoted telling Plastiras, "I gave gold and you gave me copper."

Plastiras governed Greece as a prime minister for three terms in 1945, 1951 and 1952. During his tenure Plastiras oversaw construction of the dam at the Tavropos (Megdovas) River to form a lake. The lake and dam, both formerly named Tavropos, now bear his name.

The majority of the work on these two projects was performed by the residents of the Agrafa themselves, known as Agrafiotes, providing a major economic boost to the area. The dam was a key factor in the electrification and modernization of Greece. The electricity it produces supplies much of mainland Greece north of Peloponnesus. Lake Plastiras provides a year-round source of water for the people of the Agrafa and an irrigation source to the farmers in the plains of Thessaly. General Plastiras' investment in his native region has transformed the Agrafa, once one of the poorest and most isolated areas of Greece, into a bustling tourist hub with scenic views which rival the Alpine regions in western Europe.