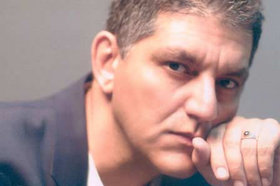 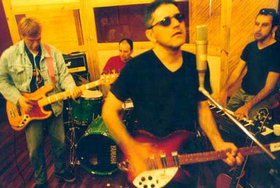 Nikolaos Portokaloglou was born December 30, 1957 at Volos, Thessaly. His father, a refugee from Smyrni, worked for an oil company while his mother, a native with roots in two villages of the area, Almyros and Mitzela. Nikos Portokaloglou is the second child of the family, after one brother who is older by four years.

In 1958, the family moves to Crete for a year, then returns to Volos for a while, and finally settles in Athens in 1961, in the suburb of Nea Smyrni.

He goes to school at the 3rd, the 1st and the 6th school of Nea Smyrni. In the third grade he meets Odysseas Tsakalos, the person who will later become his main partner in the creation of the band FATME, as well as in his personal career, and who at the time was simply…the best football player of the school.

In 1969 he is Junior High school student at the Evangelical School of Nea Smyrni. His basic interests, besides schoolwork, are drawing and football. His first musical influences, via his parents, are the easy listening songs of the earlier years, the songs of Hadjidakis with Nana Mouschouri, international artists of the period such as Frank Sinatra and Yves Montant, and some other pieces of classical music. Through the music influences of his brother he meets the Beatles, Jimmy Hendrix and also the LP Perivoli Tou Trellou by Dionysis Savvopoulos.

In the second grade of junior high school, in 1970, he acquires his first guitar – a guitar which was a left-over of similar youthful activities of his father, forgotten by him in a trunk in the family house in Volos – and with the help of a method of practical learning, plus a sudden personal passionate drive, he starts to study for hours, playing songs from records by ear.

In 1972, he makes an effort to study at a music school – the National Conservatory of Nea Smyrni. Being a practical guitarist with an individual approach on the study of music, he becomes disappointed by the formal style of learning based on the classical standards. After attending guitar lessons for a while and some lessons in music theory over one year, he abandons his studies.

In 1973, with some of his friends from school - amongst them Odysseas Tsakalos who had already started to play the drums – they create a band and start performing at friends’ homes or school dances, covers of songs by the Beatles, the Rolling Stones, Jimmy Hendrix and old rock n’ roll songs.

At the same time, during their more private get-togethers, the members of the band play and study the earlier works of Manos Hadjidakis (Blood Wedding , A Tale With No Name etc.). With his friend Giorgos Filippakis – who later became known as a member of the band Hanome Giati Remvazo – they start writing their first songs together, which are “imitations of the foreign songs that we played” and whose lyrics are, of course, in English.

He finishes High School in 1975. After being prompted to do so by his parents – and due to his earlier aptitude for drawing – he takes the entry exams for the School of Architecture but fails. At the same time he begins to take lessons in Byzantine music at the National Conservatory of Nea Smyrni and begins to write his first songs with Greek lyrics and issues with which he is preoccupied at the time in his effort to create his career. One of the most interesting songs of this first period is – the later well known song – Asotos Ios (Prodigal Son) and the song Piso ap' tis Grilies (Behind the Shutters), which of course will enter into the discography with the first record of FATME, 4-5 years later. For an extended time period he attends the music school Ainian at Patisia, where his studies prove more vital than his earlier attempts, with regards to his approach to the guitar and vocals.

The Fatme years and beyond 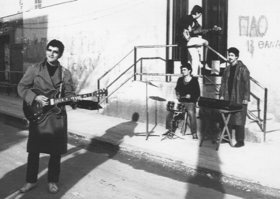 The early years with Fatme

Nikos Portokaloglou quickly stood out and proved his musical mood by writing the lyrics and music for the six albums the group released. The album "Palko" (Stage), released in 1989, sounded the end of the band and the beginning of a new, individual course, the one Nikos Portokaloglou followed. In 1990 he released the album "Fones" (Voices). The artist dedicated the album to two great creators he appraised: John Lennon and Vassilis Tsitsanis.

The success was not immediate. Time, however, rewarded the artist with the recognition he deserved. Eight albums followed, while in 2003 the six albums of "Fatme" and his two albums "Fones" and "Siko psychi mou, siko horepse" (Get up my soul, get up and dance) were released once again.

During all these years, he has collaborated with some of the most significant Greek artists, either by singing with them -in their albums or in concerts- or writing music and lyrics: Haris Alexiou, Dimitris Mitropanos, Dionysis Savvopoulos, Haris and Panos Katsimihas, Eleftheria Arvanitaki, Elli Paspala, Poly Panou, Eleni Tsaligopoulou, Nikos Ziogalas, Manolis Famellos, Yiannis Kotsiras, Stavros Logaridis. These are some the names musically related with his career. Last year, he collaborated with Andriana Babali, in her debut album "...Kai i gi gyrizei" (And the earth goes round). 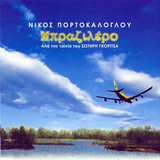 Brazilero: Cover of the soundtrack CD

Among his collaborations, the one with director Sotiris Goritsas for his film "Valkanizater" in 1997 stands out. This step into the world of cinema, however, was not the only one. Four years later, he collaborates once again with the director, this time for the film "Brazilero." "I find a part of myself in a film, I identify myself with feelings familiar to me" he reveals and continues "I see Goritsas' heroes as parts of myself."

And a true creator -all the more so when he is composer, lyrist and singer at the same time- keeps moving on. To the influences of Manos Hadjidakis, Beatles, Rolling Stones, Jimmy Hendrix and Bob Dylan, other have been added, from the traditional Greek and oriental music. The combination of traditional and rock sounds was followed by the game with electronic sounds, dominating in Europe.

Always "with it," along with the changes of times, Nikos Portokaloglou constantly proves that progress doesn't mean oblivion. As long as there is imagination and inspiration. "I am and oriental rocker" he says. Perhaps, this tells all that need to be told...

In December 2003 he releases his new album entitled “Dipsa” that includes 13 new songs. The artists Melina Aslanidou and Adrianna Babali appear on the album.

The year 2004 finds Nikos Portokaloglou at “Mylos” in Thessaloniki for his winter concerts in the beginning of February. soon after, he appeared in Athens at the venue “Stavros tou Notou”.