From Phantis
(Redirected from Panachaiki F.C.)
Jump to navigation Jump to search 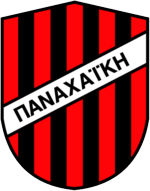 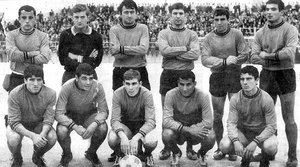 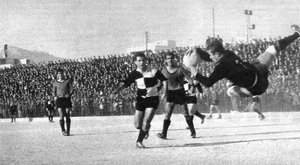 Giorgos Sarantopoulos in a spectacular save

Panachaiki's history starts before 1900. Specifically, in 1891 before the first modern Olympic games in Patra the Panachaikos Gymnastikos Syllogos was established, which later joined Gymnastiki Etaireia Patron (est. 1894), and then the joint teams (1923) became Panachaiki Gymnastiki Enosi. First soccer game held in Patras on January 18, 1899 had as opponents Panachaikos G.S. vs Team of British Ship «Boxier» 4-2. With the founding of the club, soccer started to spread throughout Patra, in a time where athletics, weight lifting and wrestling were king.

Soccer picked the interest of most youngsters in Patra and very soon the Enosi Podosferikon Somation Patron was established, which started to put together local championships from the Achaea, Ileia and Aitoloakarnania prefectures. This meant a chance for Panachaiki to prove themselves not only to Patra but the rest of Greece. Panaitolikos, Apollon Patron, and Panaigialios were the main Panachaiki rivals. Although those clubs were much stronger, Panachaiki officials managed to overcome the difficulties presented and in time made their club "Queen of Peloponnesus".

A major problem that cost Panachaiki to be amongst the top teams in Greece was the distance between Patra and Athens. At that time the distance had to be covered by a six hour car-drive, and half-day with a boat! This meant that Panachaiki could only compete in regional tournaments and in the 1953-1954 season they won the Paneparchiako Championship.

Kostas Davourlis, one of the greatest Greek soccer talents the past 35 years scored 191 goals in 360 games with Panachaiki.

Their most successful season was in 1973 when they finished 4th in the Greek A' Division and earned an UEFA Cup berth.

The team plays in the “Kostas Davourlis Stadium”, formerly known as the Pampelonisiako Stadium or stadium of Panachaiki, which was utilized for the Athens 2004 Summer Olympics. The team played in the 2002-03 season at the Superleague. Recently demoted, they are seeking promotion in the near future into the top flight.