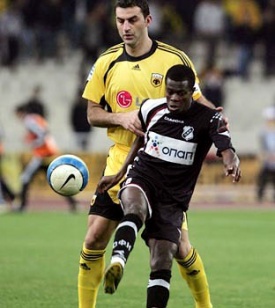 Peter Ofori-Quaye played for Olympiakos for the 1997-2003 seasons

Ofori-Quaye has spent most of his career in the Greek division and has amassed 33 goals in his 10 seasons in the league. Ofori-Quaye is entering the 2nd year of a 3-year contract he signed with OFI from Liberty Professionals in 2005.

Ofori-Quaye is the youngest player to ever score in the top Greek football division. He scored for Kalamata at the age of 16 years, 2 months και 4 days, in the 1996 game Kamalata - Apollon Athens 1-0.

He was part of the Ghanaian 2000 African Nations Cup team, who exited in the quarter-finals after losing to South Africa. He also played at the 1997 and 1999 FIFA World Youth Championship.