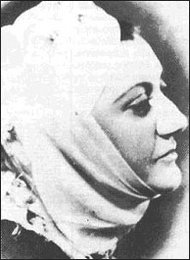 Labeled The Singer of Victory for her spirit-lifting singing

Vembo was born on February 10, 1910 in Adrianople, Eastern Thrace. She came with her family to Greece after the Asia Minor Disaster of 1922. The family first settled in Tsaritsani and later in Volos, Thessaly.

Sophia Vembo started performing in the 1930s as a stage actress and as a singer for Columbia Records Company. She sang love songs of that era and became popular however, she truly exploded on the scene when World War II broke out. Her songs, praising Greek soldiers and mocking Benito Mussolini raised the morale of soldiers and civilians alike and earned her the nickname "The Singer of Victory". When the Germans entered Athens in 1941, Vembo escaped to the Middle East where she continued to do her part for the war effort.

After the war, Vembo acquired a theatre for the performances of her group. In 1957 she married Mimis Traiforos after a very lengthy romance. During the 1960s, she cut down on her theatre performances and finally stopped them altogether by 1970.

In November, 1973 during the anti-Junta protests, Vembo hid several protesters in her house and refused to surrender them to the authorities.