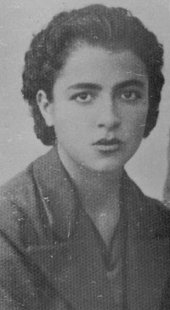 Sotiria Bellou in the early days 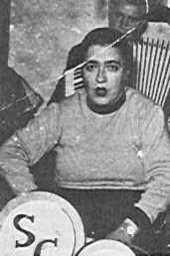 Singing with the band. 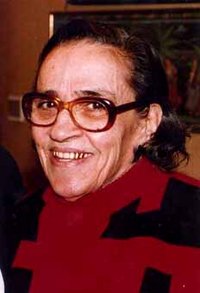 Sotiria Bellou at a later date

One of the most famous rebetisas of all, mentioned in many music guides, and contributer to the 1984 British Documentary entitled Music of the Outsiders, Sotiria Bellou was born in the village Chalia (now Drossia) of Chalkida on August 29, 1921. She was named after her mother's father, Sotiris who was a priest. She began singing at the age of three, and was soon making and playing her own guitars out of wire and wood. She lived with her grandparents until she was ten, and then went to live with her parents. Her father owned a large grocery store and she began to work for him full time.

A turning point came when she went to see the movie "The little emigree" (I prosphygopoula) starring Sophia Vembo. From then on Sotiria would sing her songs all day. She told her parents that she wanted to be a singer when she grew up. Her mother wasn't very happy about that, but her father soon bought her a guitar and paid for private lessons.

When Sotiria was seventeen her father arranged a marriage for her, which did not last long. After this brief and abusive marriage (which ended when she took revenge by throwing vytriol, a corrosive acid, in her husband's face), at age nineteen she wound up in Athens on October 28, 1940. This also happened to be the same day that Italy declared war on Greece at the beginning of the second world war. In the years of Italian and German occupation, Sotiria earned her living by using her skills as a guitarist and singer to survive while others perrished of starvation.

In 1947, she came to the attention of Vassilis Tsitsanis (another legend, who began his own recording career ten years earlier), and with him recorded the first of her many 78 rpms. As the times changed, and rebetika was no longer sought after, Sotiria, like many other artists of her generation, found very little work in night clubs.

The mid 1960s brought with them a sense of cultural awakening, and a new-found interest in rebetika among young people which peaked in the 1980s. Suddenly, people couldn't get enough of the surviving rebetes, and Sotiria, with her deep voice, full of emotion and pride, was heard on many recordings, and helped usher in a new era for rebetika. That, combined with her honesty, her love for gambling, her participation in the struggle for civil rights (for which she was beaten several times), and the fact that she was openly a lesbian in a time when this was practically unheard of, ensures her a place not only on the rebetic charts, but in the hearts and minds of those whom she touched during her lifetime, and in those whom she continues to inspire. Like her or not, she was an outspoken woman of her generation.

Sotiria Bellou died in Athens on August 27, 1997. She was buried per request in First Cemetery next to Vassilis Tsitsanis.