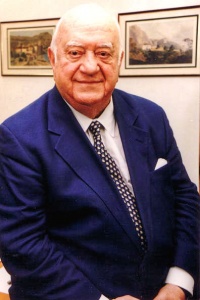 Andrew A. Athens (real name: Andreas Athanassoulias) was born in 1922 in Chicago to immigrant parents (father's name Aristides). He distinguished himself as a business man and within the Greek American community for serving 11 years as President of the Council for Hellenes Abroad (SAE), representative organization for Greeks around.

In 1950 he co-founded the Metron Steel Corporation, a particularly successful industry in the American Midwest that even today is one of the USA's largest steelworks. He served as its President and CEO from 1950 through 1991. He now serves as chairman of the board of Alpha Steel, but he devotes his full-time to volunteer work on behalf of Hellenism and Orthodoxy.

Athens became involved in Greek community affairs early on in his adult life. He has received over 42 awards from governments, philanthropic foundations and other organizations around the world.

Athens also distinguished himself during his military service in the Second World War and in the reconstruction of Europe. As a US Army captain he took part in Allied operations in Europe and the Middle East and was honored both by the USA and by the Hungarian government for his contribution to that country's postwar reconstruction.

For 25 years, and during the tenure of Archbishop Iakovos, he was president of the council of the Greek Orthodox Archdiocese of North and South America.

A main thrust of Mr. Athens' work was the creation of strong, friendly ties between the United States, Greece and Cyprus. To accomplish that mission, he founded the United Hellenic American Congress in 1974 and has been its National Chairman since then, and co-founded the National Coordinated Effort of Hellenes (CEH) with offices in Washington, DC.

In 1995, Mr. Athens became the founding World President of the Council of Hellenes Abroad (SAE) and was re-elected to that position by the international assembly of delegates three times since then, the last time in 2001.

He stepped down as SAE President in December of 2006 and was succeeded by Stefanos Tamvakis.