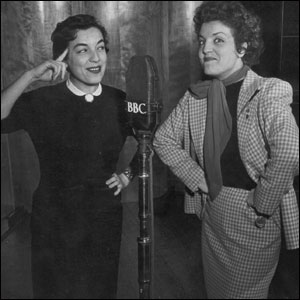 Anna Kalouta was a Greek multi-talented stage and screen actress.

Kalouta was born in Athens on September 29, 1920. She made her debut in theatre at the age of 4, when Marika Kotopouli discovered the talents of both her and her sister Maria, giving them roles in the Revue. Since then, she has played all theatre forms, including operetta (she belongs to the third generation of Greek operetta), ethography, musical comedy but even tragedy; although the Revue was her natural inclination.

Interpreting complete roles since her childhood, Anna Kalouta appeared in places like the Carnegie Hall, the Masonic Temple in Boston, the Town hall in New York and the Salle Gaveau in Paris, and she collaborated with artists like Yma Sumac (in Chicago), Maurice Chevalier (in Istanbul), Mistinguet, Lilian Harvey, Patechou, Tino Rossi and others. She played to most Greek communities abroad, in most ancient theatres, and was awarded about 35 honorary mentions by municipalities and societies (although never from the Greek state).

After 65 years of continuous appearance on the stage, with successes that marked an era like O tritos anthropos (The third man), O tsolias, I smyrnia (The woman from Smyrna), M' agapa - den m' agapa (He loves me - he loves me not), Vre dounia (Oh, you world), M' aresis (I like you) and others, Anna Kalouta was appropriately named Mrs Revue.