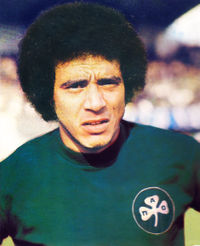 Araquem de Melo was a former Brazilian football midfielder of the 1970s era.

De Melo was born on July 7, 1944. He played in Brazil for Vasco da Gama and in Argentina for Huracan before moving to Greece and Panathinaikos in 1972. De Melo was one of the first foreigners to play in Greece and the first Brazilian to don a PAO jersey. In the two years he played for the greens he scored 19 goals in 37 games. In 1975, he transferred to Atromitos Athens where he played a single season (12 appearances - 2 goals).