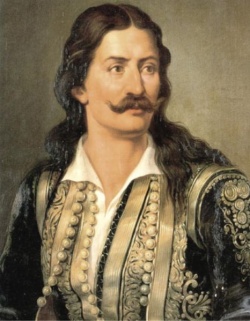 Athanasios Diakos was a hero of the Greek War of Independence. He was born Athanasios Massavetas in 1788. Two villages in the Phocis prefecture claim to be his birthplace: Artotina and Ano Mousounitsa.

Prior to the war he entered a monastery and was ordained a deacon ("diakos" in the Greek language). One day a Turkish pasha came to his monastery and made some crude remarks about his good looks. Diakos slew him and fled to the mountains. He join a band of klephts under Odysseus Androutsos, who made him second in command. Eventually, he headed his own band.

In April 1821, Omer Vrioni, the commander of the Turkish army, advanced with 9,000 men from Thessaly to crush the revolt in Peloponnesus. Diakos and his band of followers along with two other bands - a total of perhaps 1,500 men - took up defensive positions at the river of Alamana (Spercheios), near Thermopylae. At the ensuing Battle of Alamana, Diakos' men fought for several hours before they were overwhelmed.

The wounded Diakos was taken to Vrioni. Vrioni offered to make Diakos an officer in his army but Diakos refused and replied "I was born a Greek and I will die a Greek".

Vrioni then ordered that Diakos be impaled on a spit and roasted over a fire. As he was about to die onlookers heard him sing "Look at the time Charon chose to take me, now that branches are flowering, now that the earth sends forth grass" referring to the Greeks' uprising against the Turks.