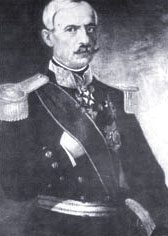 Miaoulis was born on the island of Hydra in 1815. He was the son of Andreas Miaoulis, a hero of the Greek War of Independence. His first years were spent at sea alongside his father. Later, Miaoulis studied at the Military Academy of Munich and served as an officer of the Greek Navy. He later served as bodyguard of King Otto, as Minister of the Navy and as Prime Minister of Greece from 1857 until 1862.