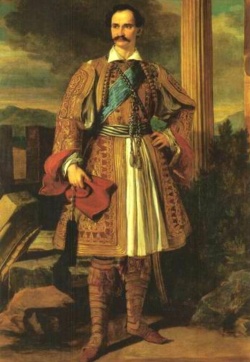 Otto of Wittelsbach, Prince of Bavaria and King of Greece (Salzburg, June 1, 1815 - Bamberg, July 26, 1867) was made the first modern king of Greece in 1832 under the Convention of London, whereby Greece became a new independent kingdom under the protection of the United Kingdom, France and Russia.

He was born in Salzburg, Austria, the son of King Ludwig I of Bavaria and Therese of Saxe-Altenburg (1792-1854). Through his ancestor the Bavarian Duke John II Wittelsbach, Otto was a descendant of the Greek Imperial dynasties of Comnenos and Laskaris.

Not quite 18, the young prince entered Greece, on February 6 (January 25 OS), 1833, with three Bavarian advisors in a council of regency headed by Count Josef Ludwig von Armansperg, who as minister of finance, had recently succeeded in restoring Bavarian credit at the cost of his popularity. The United Kingdom and the Rothschild bank, who were underwriting the Greek loans, insisted on financial stringency on Armansperg. The Greeks were soon more heavily taxed than under Turkish rule; they had exchanged a hated Ottoman tyranny, which they understood, for government by bureaucracy, which they despised. In addition, Otto showed little respect for local customs. As a staunch Catholic, and thus considered a heretic among the Greeks, he never changed his religion since he was guaranteed, under the constitutional provisions as the first King of a new Greek dynasty, that he could remain a Catholic. His heirs, however, had he had any, would have would have to be Orthodox.

In 1837 Otto visited Germany and married the beautiful and talented Princess Amelie of Oldenburg (December 21, 1818 - May 20, 1875). The wedding took place not in Greece, but in Oldenburg, on November 22, 1836; the marriage did not produce an heir and the new queen made herself unpopular by interfering in the government.

An attempt to gain Greek favour by efforts to acquire Crete in 1841 failed to materialize and only succeeded in embroiling him with the Great Powers.

Initially Otto refused to grant a constitution, but was forced to do so after a military coup, which occurred as soon as German troops were withdrawn from the kingdom, in 1843. Now for the first time he had Greeks in his council. His prestige suffered by the "Pacifico incident" of 1850, when British Prime Minister Palmerston sent the British fleet to blockade the Piraeus port with warships, to exact reparation for a perceived injustice done to a British subject.

The "Great Idea", Greece's dream of restoring the Byzantine Empire under Christian rule, led to his wish to enter the Crimean War against Turkey; the enterprise was unsuccessful and resulted in a British blocade. In 1861 a student named Drusios attempted to murder the queen, and was openly hailed as a hero. After another coup in 1862, a provisional government was set up and summoned a national convention. The king and queen took refuge on a British warship and returned to Bavaria, taking with them the Greek royal regalia which he had brought from Bavaria in 1832.

He died in the palace of the former bishops of Bamberg, Germany, and was buried in Munich. During his retirement, he would still wear the traditional uniform nowadays worn only by the evzones; during the rebellion in Crete against the Ottoman Empire in 1866, Otto donated most of his fortune to support the Cretan rebellion by supplying it with arms.