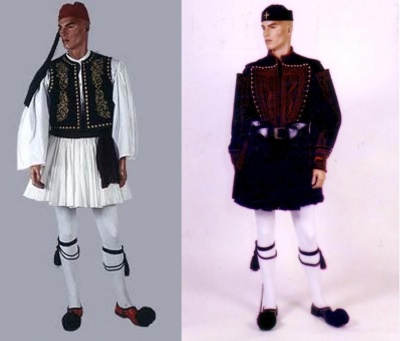 Greek Fustanelles - (Right) - the Makedonomahi, which is from Macedonia, the northernmost region of Greece. (Left) - The Fustanella (Tsolias) Prevailed in the urban centers of Moreas (Peloponnese) and Roumeli (Central Greece).

Fustanella (for spelling in various languages, see chart below) is a traditional skirt-like garment worn by men in the Balkans. In modern times, the fustanella is part of traditional Albanian and Greeks dresses, worn mainly by ceremonial Greek military units and Albanian folk dancers.

Findings of depictions of fustanellas in Slovenia , from eras in which Slovenia was part of Illyria, and inhabitants in several regions of the country wearing fustanellas in the past have lead many researchers and historians to the conclusion of an Illyrian origin of fustanella, with Albanians having inherited fustanella from Illyrians.[1][2] The fustanella is thought by some researchers to have evolved from the Roman toga. Many statues of Roman emperors depict them wearing knee-length pleated kilts[3]. In colder regions, more folds were added.

Fustanella is thought to have been originally a southern Albanian outfit of Tosks, which was introduced in Greece, during the Ottoman Occupation.[4]

The use of the garment was spread by Albanian bands via Epirus into Greece during the 18th and 19th centuries[5][6][7]. Similar garments exist as part of the folk costume as far north as Romania and as far east as Syria, with nationalists on every side claiming the garment to be an indigenous creation. Similarities to historical garments in literature and on art objects make these claims difficult to prove or disprove.

One claim of an ancient link to the modern fustanella involves an ancient statue found in the outskirts of the ancient Greek colony of Epidamnus in Illyria(modern Durrës, Albania). The region surrounding Epidamnus was inhabited by the Illyrian tribe of the Taulanti. .[8] Yet another claim involves the statue carved in a niche in the Cave of Archedemos the Nympholept, near Mount Hymettus in Athens, which statue wears a fustanella-like garment and has been dated to c. 500 BCE. Archedemos, although living in Athens, came from the Spartan colony of Thera. This is why he carved himself wearing the Dorian tunic. The origin of the Dorians is most likely to be found in the ancient Illyrian-Epirote regions.[9] The Dorian tunic was also a garment of Kouretes. Another object which is related to the fustanella was found in Albania in the modern Korçë region, which was inhabited by Illyrian tribes[10][11].

The garment is made from long strips of linen sewn together to make a pleated skirt. Some Greeks, such as general Theodoros Kolokotronis had almost four hundred pleats in their garments, one for each year of Turkish rule over Greece. The style evolved over time. In the 18th and early 19th centuries, the skirts hung below the knees, and the hem of the garment was gathered together with garters and tucked into the boots to create a "bloused" effect. Later, during the Bavarian regency, the skirts were shortened to create a sort of billowy pantaloon that stopped above the knee; this garment was worn with hose, and either buskins or decorative clogs. This is the costume worn by the modern Greek Evzones, the Presidential Guard.

While the image of warriors with frilly skirts tucked into their boots may seem impractical to a contemporary audience, it should be noted that modern paratroopers use a similar method to blouse their trousers over their jumpboots. Lace was commonly worn on military uniforms in the west until well into the 19th century, and gold braid and other adornments still serve as markers of high rank in formal military uniforms. Fustanella were very labor-intensive and thus costly, which made them a status garment that advertised the wealth and importance of the wearer. Western observers of the Greek War of Independence noted the great pride which the klephts and armatoloi took in their foustanella, and how they competed to outdo each other in the sumptuousness of their costume.

The word derives from Italian fustagno 'fustian' + -ella (diminutive), the fabric from which the earliest kilts were made. This in turn derives from Medieval Latin fūstāneum, perhaps a diminutive form of fustis, "wooden baton". Other authors consider this a calque of Greek xylino lit. 'wooden' i.e. 'cotton'[12]; others speculate that it is derived from Fostat, a suburb of Cairo where cloth was manufactured.[13] The Greek plural is foustanelles (φουστανέλλες) but as with the (semi-correct) foustanellas, it is rarely employed by native English speakers.

Native terms for "skirt" and "dress" included for comparison: