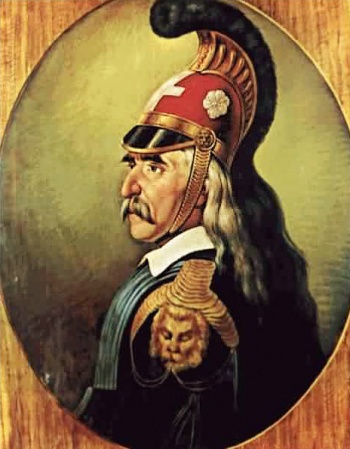 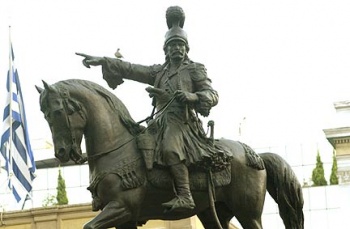 Theodoros Kolokotronis (Greek: Θεόδωρος Κολοκοτρώνης, April 1770 - February 15, 1843) was a Greek general in the Greek War of Independence against the rule of the Ottoman Empire.

Kolokotronis was born at Ramavouni in Messinia prefecture, and grew up in Limpovisi in Arcadia. His father, Konstantinos Kolokotronis, took part in an armed rebellion which was supported by Catherine the Great of Russia, then was killed in an engagement along with two of his brothers. Theodoros joined the ranks of a Peloponnesian guerrilla band, and by age fifteen was the leader ("kapetanios") of his own group. He had a brief stint at sea as a corsair, then in 1805 he took service on a series of ships in the Russian fleet in the Russo-Turkish War. After 1810 served in a corps of Greek infantry in English service on Zakynthos, and was awarded the brevet rank of brigadier for his service against the French.

Zakynthos is in the Ionian Islands, which were then a British protectorate after being bandied about between Venice, France and Russia during the Napoleonic Wars. Kolokotronis' service in the regular Russian and British forces, land and sea, would provide valuable insights to be used later in his career.

Kolokotronis returned to the mainland just prior to the outbreak of the war (officially, March 25, 1821) and formed a confederation of irregular Moreas klepht bands. These he tried to train and organize into something resembling a modern army. In May he was named archistrategos -- commanding general. He was already 50-years-old by this time, a fact which contributed to his sobriquet O Geros tou Morea -- "The Old Man of the Morea," Morea being another name for Peloponnesus.

Kolokotronis first action was the defense of Valetsi, the village near Tripolis where his army was mustering.

He next commanded Greek troops in the siege of the coastal town of Nafplio He took the port, and the Turkish garrison in the town's twin citadels was running low on supplies, but the disorganized Greek provisional government at Argos, just to the north, could not complete negotiations for its surrender before a large Ottoman force began marching southward to crush the rebels. Panicked, government officials abandoned Argos and began evacuations by sea at Nafplio. Only an under-strength battalion under Demetrios Ypsilantis remained to hold the fortress of Kastro Larissa.

Kolokotronis to the rescue

Kolokotronis gathered the klephts together to march to the relief of Ypsilantis. This was quite a feat in itself, considering the near-collapse of the government and the notoriously quarrelsome nature of the klephtic bands. Even the troublesome Souliots lent a hand.

The Ottoman army from the north commanded by Mahmud Dramali, after taking Corinth had marched to the Plain of Argos. The castle of Kastro Larissa was an excellent position, commanding the whole plain. To leave such a stronghold straddling Turkish supply lines was far too dangerous. Dramali would have to reduce the fortress before moving on. Scaling the cliffs, breaching the castle's stout walls, and overcoming its resolute defenders would be no easy task. Yet there was one weakness Dramali was unaware of: this citadel, unlike the famous Acropolis in Athens, had no spring and consequently fresh water had to be supplied from cisterns. Unfortunately for the Greeks, it was July and no rains were falling to fill the cisterns. Ypsilantis bluffed the Turks as long as he could, but towards the end of the month had to sneak his men out in the middle of the night. Dramali's men plundered the castle the next day, and he was now free to march them toward the coast to resupply. (The Greeks had pursued a scorched earth policy, and the large Ottoman force was eating through its food supplies rather quickly). Ypsilantis defense had bought Kolokotronis and the klephts valuable time.

To his dismay, Dramali found himself cut off from his supply fleet, which had intended to land at Nafplio but was successfully blockaded by the Greeks fleet under Admiral Andreas Miaoulis. Dramali reluctantly decided upon a retreat toward Corinth through the Dervenakia Pass, through which he had just come unmolested. This was exactly what Kolokotronis had been hoping for. On July 26, 1822 his quicker-moving guerrilla forces trapped the Turks in the pass and annihilated them. In his memories he confesses that more then 35.000 Turkish civilians including women and children has been killed by his guards. A devastated Sultan Mahmud II in Constantinople was forced to turn to Mehmet Ali, ruler of the nominally Ottoman pashaluk of Egypt for help.

The Greeks resumed the siege against the fortresses at Nafplio, which fell in December. Kolokotronis is said to have ridden his horse up the steep slopes of Kastro Palamidi to celebrate his victory there; a statue in the town square commemorates the event. He is attired in something resembling the costume of a hussar topped with a plumed Corinthian helmet, which he was fond of wearing, and which foreign Philhellenes were even fonder of seeing him in. (While he seems to have enjoyed dressing like a Western European cavalryman cum Ancient Greek hoplite, he is also frequently depicted wearing the more traditional fustanella and other Greek accoutrements).

Later in the same year Kolokotrinis's political enemies in the Greek provisional government, led by Petrobey Mavromichalis had him imprisoned in the Palamidi jail, but he was released when an Egyptian army under the command of Ibrahim Pasha invaded the Morea.

Ibrahim was fresh from fighting the Wahhabi rebels in Arabia, and so was used to fighting guerrillas. His troops were armed with the most modern equipment and trained by European experts. The sultan had promised his father the island of Crete as an appanage for young Ibrahim if he could crush the rebels. With his eye on the prize, he burned his way through the Peloponnese, gaining much territory but little sympathy from Western European public opinion, which in the long run proved disastrous for the Turks.

The islands of Sphacteria and Navarino had already fallen into Ibrahim's hands, and to make matters worse for Kolokotronis, he still had to be on guard against the machinations of Petrobey Mavromichalis even as he was bracing himself against the new threat.

Kolokotronis used guerrilla tactics to attrit Ibrahim's forces; but given his limited resources, was unable to prevent the widespread destruction that Ibrahim left in his wake. Still, in 1823, in recognition of his military acumen and many services to the Greek cause, he was appointed commander-in-chief of Greek forces in the Peloponnese.

After the war Kolokotronis became a supporter of Count Ioannis Kapodistrias and a proponent of alliance with Russia. When the count was assassinated on October 9, 1831, Kolokotronis created his own administration in support of Prince Otto of Bavaria as a king of Greece. However, later he opposed the Bavarian-dominated regency during his rule. He was charged with treason and on June 7 (May 25 OS), 1834 sentenced to death along with Dimitris Plapoutas another revolutionary. Both men were pardoned in 1835.

Theodoros Kolokotronis died in 1843 in Athens.

In the twilight of his life, Kolokotronis had learned to write in order to complete his memoirs, which have been a perennial favorite in Greece and have been several times translated into English and other languages.

Kolokotronis's famed helmet, along with the rest of his arms and armor, may today be seen in the National History Museum of Greece in Athens. In addition to the Nafplio statue mentioned earlier, there is another to be seen in Athens, in the forecourt of the Old Parliament building on Stadiou Street, near Syntagma Square.

Kolokotronis was portrayed on the note of 5,000 drachmas. This note was issued from 1997 till the euro was introduced in 2002.

The stadium of Asteras Tripolis is called Theodoros Kolokotronis-stadium.