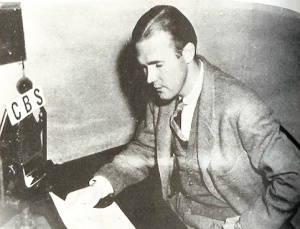 George Polk, (October 17, 1913 - May 8, 1948) was an American journalist for CBS who disappeared in Greece and was found dead shortly afterwards, by fisherman Lambros Antonaros, in Thessaloniki harbour, on Sunday May 16, 1948. He appeared to be shot at point blank range, in the back of the head, and with hands and feet tied. Polk was covering the Greek Civil War between the right wing government and communists and had been critical of both sides. He had tried, prior to his death, to make contact with the rebel forces in the mountains.

A communist journalist, Gregorios Staktopoulos, was tried and convicted of helping Vangelis Vasvanas and Adam Mouzenidis, members of the illegal communist army, commit the murder. Staktopoulos himself maintained that the confession that led to his conviction was obtained through torture, and in fact it was later revealed that Adam Mouzenidis arrived at Thessaloniki, where he was allegedly introduced to Polk, two days after Polk's murder, and Vasvanas was not in Greece at the time. An investigation by James G.M. Kellis (a.k.a. Killis), a former OSS officer with knowledge of Greek political circles and power brokers, concluded that Greek communist circles lacked the power and influence to commit and cover-up the murder. Kellis worked on contract for the Wall Street law firm of William 'Wild Bill' Donovan, the former head of OSS, who was hired by journalist Walter Lippman to investigate the case. Following Kellis' conclusion that it was more likely Polk had been murdered by right-wing groups within or affiliated to the Greek government, the investigation was halted and Kellis recalled to Washington. At the time the US government was financially supporting the Greek government mainly to prevent a possible communist take-over of the country. The Greek government had been supported by the British Government throughout 1941-1945 but this became an impossibility after the war.

Polk had married Rea (a.k.a. Rhea) Kokkoni, a Greek national and ex-stewardess, seven months prior to his death. After allegedly being harassed and threatened by the Greek government she fled to the US where she was debriefed by Donovan's law firm. She became friendly with Barbara Colby, the wife of William Colby, a former OSS officer attached to Donovan's firm, who later would become director of the CIA.

Reporters in New York city started a fundraising project to send an independent investigation committee to Greece, and from this effort the newsmen's commission was formed. Members included Ernest Hemingway, William Polk (George Polk's brother), William Price (Polk's cousin) and Homer Brigart. This was soon however eclipsed in media coverage by the Lippman Committee, comprised mostly of Washington journalists with Walter Lippman as chairman (hence the name) and James Reston of the New York Times.

Within months of his death, a group of American journalists instigated the 'George Polk Awards' for Journalism.