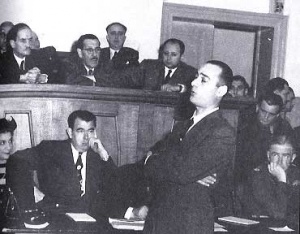 Gregorios Staktopoulos testifies at his trial for the murder of George Polk.

Gregorios Staktopoulos was a Greek journalist best remembered for being convicted of the murder of American journalist, George Polk, during the Greek Civil War.

Staktopoulos was born in Trapezond, Pontus, Asia Minor in 1910. After the Asia Minor Disaster, he and his family moved first to Athens and later to Thessaloniki. He graduated from the American College of Thessaloniki and then went on to work with local newspapers where he developed a career as a journalist. After serving in World War II, he worked for communist publications "Popular Voice" and "Macedonia".

In 1948, Staktopoulos was arrested for the murder of journalist George Polk whose body was found by a fisherman in the Thermaic Gulf near Thessaloniki harbour. Staktopoulos was tried and convicted on April 21, 1949 of the murder and sentenced to life imprisonment.

His sentence was twice reduced and finally, in 1960, he was released under conditions.

After his release, Staktopoulos continued to work as a journalist and died on February 28, 1998 at the Evangelismos Hospital in Athens where he was being treated for an acute pulmonary infection at the age of 88.

Staktopoulos has been acclaimed as a victim and a scapegoat of the Polk affair. Some of the accusations against him have since proven to be false e.g. his supposed cohort, Adam Mouzenidis, had died weeks before the Polk murder had taken place. However, despite the opinions of many that he was innocent, Staktopoulos has yet to be absolved of the conviction that marred his life.

In January 2004 his widow's, Theodora Zisimopoulou-Staktopoulou's appeal for a posthumous retrial based on claims that new evidence proves his innocence, is rejected by the Supreme Court of Greece.