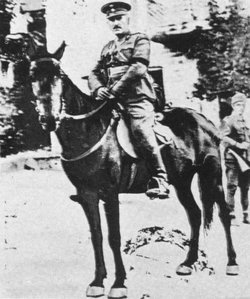 He was born in the village of Kechrianika, Laconia prefecture in 1897. After graduating military school, he saw action in World War I and the Greco-Turkish War (1919 - 1922).

Davakis was a colonel when Italy attacked Greece in World War II. As commander of the Pindus detachment, he successfully repelled the Italian Julia Alpinisti Division's attack in late October 1940 but was seriously injured in November of the same year, when he counter-attacked, nearly destroying it.

Davakis was taken prisoner by the Italians in December 1942 while still in hospital. As he was being taken to Italy, his boat was torpedoed on January 21, 1943 and all aboard perished. He was buried in Avlona (Vlore). He was honoured posthumously with the silver medal of sacrifice by the Athens Academy.