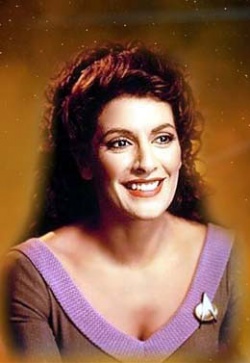 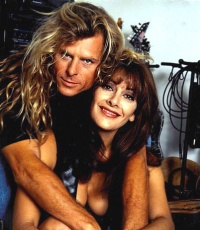 Marina Sirtis (born March 29, 1960) is a Greek-British actress who is most noted for playing the comely half-human half-Betazoid Counselor Deanna Troi on the television and film series Star Trek: The Next Generation. She also played the role of the ruthless Demona in the animated series, Gargoyles. Before her role in Star Trek, Sirtis had only done a few films of little note (including the Faye Dunaway film The Wicked Lady). She was born to Greek parents in London, England.

Sirtis and Denise Crosby initially tried out for the other's eventual role on The Next Generation. Sirtis' character was going to be named Lt. Macha Hernandez. Gene Roddenberry decided to switch them, and Macha Hernandez became Natasha Yar.

In 1998, she had a guest role in an episode of the Dick Van Dyke CBS series, Diagnosis: Murder. In 2001, she made a highly publicized guest appearance on the BBC hospital drama series Casualty. In 2004, Sirtis had a role in the Academy Award winning ensemble movie Crash as the wife of an Iranian shopkeeper. She has also reprised her character of Deanna Troi in Star Trek: TNG and Star Trek: Voyager on several occasions. She has also appeared in Stargate SG-1 playing the Russian Dr. Svetlana Markov, and as Sister Margaret in Earth: Final Conflict.

A naturalized U.S. citizen, Marina Sirtis has been married to Michael Lamper since June 21, 1992.