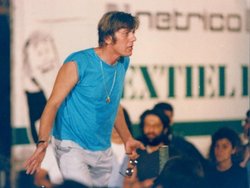 The cover of the album Flou

Legendary Greek rock persona, point of reference of the Greek rock culture. He was born on July 27, 1948 in Athens.

In 1976 he forms the band Spyridoula with fellow musicians Vasilis and Nikos Spyropoulos. With producer Thodoros Sarantis they record the album Flou, a work that is referenced to date as one of the most complete Greek works of rock music.

Gifted singer and writer of lyrics full of ideology, he is the inspiration of the dissenting generation who were not able to transform their problems.

When he succumbed under the weight of his rock sensitivity on December 6, 1990 of a heroin overdose, his "Aprosarmostoi" band made a record called "Αντε και καλή τύχη μάγκες".