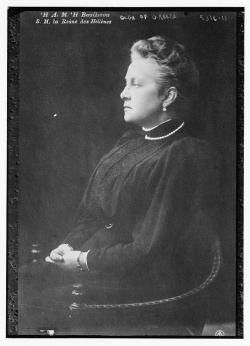 A granddaughter of Tsar Nicholas I of Russia and cousin of Tsar Nicholas II, Olga was the daughter of Grand Duke Konstantin Nikolaevich Romanov and Alexandra Iosifovna, a daughter of the Duke of Saxe-Altenberg. She met the young king during his trip to Russia to meet with his sister Dagmar, the Danish wife of Tsar Alexander III. They fell in love and married in 1867, when she was sixteen years old.

She was acting Regent after her grandson, Alexander I died on 25 October, 1920 of a monkey bite, until her son Constantine returned to take over the throne a second time.