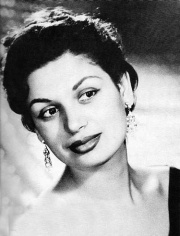 Dialyna won the Star Hellas Pageant title, (Greek: Μις Σταρ Ελλάς) and went on to represent Greece at the Miss Universe 1954 pageant that was held in Long Beach, California. Rika, along with Miss Korea, Pu Rak Hi, were denied entry into the U.S. because of their alledged Communist affiliations. Dialyna was disqualified from obtaining a U.S. visa for allegedly illustrating a book on Communism. In her place went first runner up, Effie Androulakakis, who won the Miss Friendship award. U.S. Secretary of State John Foster Dulles intervened in Rika's case and she was able to optain a temporary entry permit. She arrived just a few days prior the event making the top 16 finalists. Effie Androulakakis was asked to remain in the competition as Miss Crete but she declined stating that Rika was "the choice the people of my country to represent them here." While in the United States, Rika fell in love and got married.

Dialyna has played in the theatre groups of Kostas Hadjichristos, Lambros Konstantaras, Mimis Fotopoulos and others.

In the middle with Telly Savalas

She has starred in the films:

Dialyna also took painting lessons. In 2002, her art work was put on display at the Benedictine Art Awards, her work being one of 40 to make the Park Avenue Art Gallery out of 2000 that participated in the event.