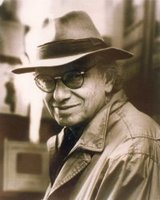 The novelist Vasilis Vasilikos (alternative spelling Vassilis Vassilikos), gained international fame when his novel "Z" became a successful film, directed by Costas Gavras. Born November 18, 1934, in Kavala, the son of a member of the Greek parliament, he studied law at the University of Thessaloniki. During the years of dictatorship in Greece, he lived in Europe as a political refugee.

His early work is, at times, autobiographical, with elements of experimentation and lyricism in his style and subject matter.

Writer of more than 94 books (novels, short stories, essays, poetry, theater, plays). Most of them translated into English, French, Spanish, German, Italian, Swedish e.t.c. His political novel "Z" which made him a world famous writer, was translated in 32 languages. This book which characterizes the Greek Political Life of the "Sixties" and exposes his doubt and anger for the world of politics, through the story of the assassination of Parliament Member, Grigoris Lambrakis, was made a film by Costas Gavras featuring Yves Montand and Jean Louis Trentignant, winning the jury prize at the 1969 Cannes Film Festival. In 1962, his literary work was rewarded by gaining the literary prize called "The Twelve" (equivalent to the French "Prix Concours").