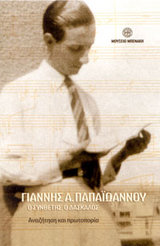 Yiannis Papaioannou, one of the greatest Greek composers of the 20th century. Yiannis Papaioannou was also a great teacher. His work and his teaching have greatly influenced the contemporary Greek music and his fame traveled far beyond Greece. The legacy he left behind is most important, due to its quality and amplitude.

Yiannis Papaioannou was born on January 7, 1910 in Kavala. He was first introduced to music at the age of 6, when he began studying the piano on his own. Later, he studied at the Hellenic Conservatory, under the tutelage of Emilios Riadis. He had also worked with Arthur Honegger. In 1949, he won an UNESCO scholarship, which gave him the opportunity to visit the greatest music centres of Europe and learn about the music trends of that time. He continued getting informed on the progress of music styles till the end of his career.

From 1954 till 1976, he was teaching theory and composition at the Hellenic Conservatory and at the same time he was giving private lessons -something he continued doing till the end of his life. His teaching is considered quite important, not only thanks to his personal methodology but also because he was the first in Greece to teach the traditional music techniques together with the contemporary ones.

He was also awarded various prizes. In 1953, he was awarded for his Symphony no 3 in the International Queen Elisabeth of Belgium Competition. In 1970, the University of Vienna gave him the Gottfried von Herder prize. Finally, in 1983, the Academy of Athens awarded him the Medal of Fine Arts.