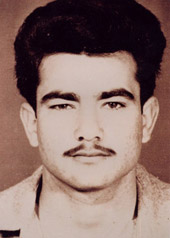 Charilaos Michail was a Cypriot EOKA fighter during the 1955 - 1959 struggle against the British.

Michail was born on February 9, 1935, in the village of Galini, Lefkosia province. He worked in Cyprus Metallurgical Works when the struggle broke out and he joined EOKA together with his father and some of his brothers. On December 15, 1955, his group joined Markos Drakos' team for an ambush against a British detachment, led by Major B.J. Coombe, near Mersinaki, close to ancient Soloi. In the ensuing battle of Soloi, Michail was captured by the British. He had had a chance to escape but would not abandon his friend, Andreas Zakos, who was injured during the battle.

Michail was convicted by the British colonial court and sentenced to death. He was executed by hanging on August 9, 1956, along with his friend Andreas Zakos and Iakovos Patatsos, who was captured in a separate incident, The three men are buried in the Imprisoned Tombs of the Central Jail of Nicosia.