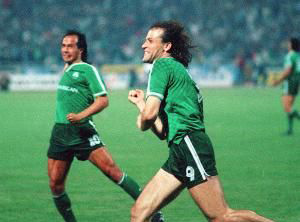 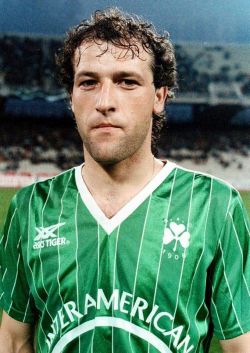 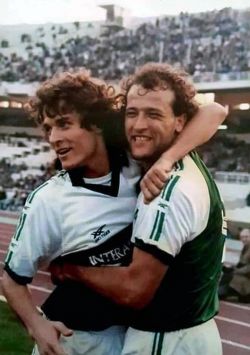 Christos Dimopoulos is a Greek retired football forward whose nickname was "O Fonias" (The Killer).

Dimopoulos was born on June 10, 1958, in Xylokera Elis prefecture. His first professional club was Panaitolikos with whom he played for two seasons between 1978 and 1980.

In 1980, Dimopoulos moved to Thessaloniki to play with PAOK. His goal-scoring exploits helped PAOK lift the league trophy in 1985.

Dimopoulos signed as a free agent from PAOK during the summer of 1985, and gave a good 5-year service to Panathinaikos scoring few but crucial goals. Possibly his best ever performance was in a league game against his old team PAOK where he scored a hat-trick with PAO winning 3-2.

Dimopoulos gained the nickname "killer" because when in front of goal would belt the ball with all his power.

During his career Christos Dimopoulos was capped 10 times by the Greek National Football Team. His younger brothers Thanasis and Foukos also played football.