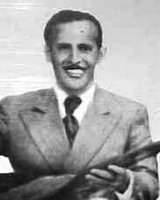 Dimitris (Mitsos) Gogos, also know as Bagianteras, was born in Piraeus in 1903 and died in Athens on November 18, 1985. He was considered by many, one of the greatest composers of the pre-WW II rebetiko.

Gogos' friendship with Giorgos Batis, Markos Vamvakaris and Stratos Payioumtzis and the fact that he was a talented artist, gave him the opportunity to record many songs during the pre-war era.

He had a unique style that makes his songs easily recognizable.

Unfortunately he became blind in 1941. He continued to play music professionally for several years, but the last years of his life were difficult, because he was not able to work anymore and almost everybody forgot him.