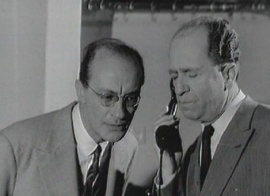 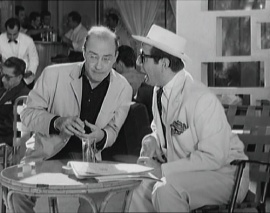 From the movie Christina with Stavros Xenidis

Dinos Eliopoulos was one of the greatest comedy actors Greece has ever produced.

Eliopoulos was born in Alexandria, Egypt on June 12, 1915. His father had come to Egypt from Peloponnesus and was a businessman. After the crash of 1929, the Iliopoulos family left Egypt for Marseille, France where Dinos attended high school. Six years later, he left for Athens to continue his studies.

Eliopoulos served his national service in the Greek Army and was discharged in 1940 however, as Greece became involved in World War II on October 28 of that same year, no sooner was Eliopoulos discharged when he was pressed into military service again.

After the war, Eliopoulos studied in the Royal Theatre's Drama School but failed his examinations. He was successful, later, in the private school of Yiannoulis Sarantidis. He acted in the theatre group of Marika Kotopouli with Mary Aroni, Dimitris Myrat and others. In 1954, he would form a theatre group of his own with fellow comic, Mimis Fotopoulos. The two men would create the best comic duo ever seen in Greece.

Dinos Eliopoulos would continue acting on stage and in the cinema well into the 1980s. For his contribution to acting, he received the King George I Award.

Eliopoulos also authored three books, two with humorous stories and his autobiography: "An Eliopoulos named Dinos". He died on June 4, 2001.