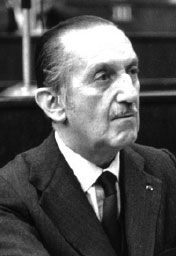 Averoff was born in Trikala, Thessaly, on April 17, 1910, however, his family origins were from Metsovo in Epirus. He studied law and political science in Lausanne, Switzerland.

Averoff first held office in February 1941 when he was appointed prefect ("nomarch") of Corfu prefecture. He left the post after Corfu was occupied but not before organising a resistance movement to the Italian occupying force. In the next year (April 28, 1942, Averoff was arrested by the Italians for resistance-related activities and was imprisoned in a concentration camp in Italy.

When the war was over, Averoff resumed his political career as member of Parliament from Ioannina and Minister in several governments (Themistoklis Sofoulis, Alexandros Diomedes, Sophoklis Venizelos, Nikolaos Plastiras) before switching his allegiance from the political Centre to the conservative National Radical Union (ERE).

Averoff continued serving as MP and Minister under Constantine Karamanlis and briefly under Panagiotis Kanellopoulos. When the Kanellopoulos government was overthrown by a coup d' etat, on April 21, 1967, Averoff started writing and established the Averoff Foundation. However, he also stayed in touch with politics, publishing and distributing underground material and also being Karamanlis' (who was in Paris) eyes and ears in Greece.

When democracy was restored to Greece in 1974, Averoff became Karamanlis' Foreign Minister serving in that post also in the government of George Rallis.

A man of many talents and diverse interests, Evangelos Averoff engaged in wide ranging social activities and left a rich literary work. He has written novels, short stories, plays, essays, and historical analyses. His works have been translated into many languages and have received international acclaim and awards such as the Gold Medal of the French Academy (1974), the Literary Award Acropolis (1978) a.o.

Particularly close were the ties which bound him to nature, to the earth and to the village of his origin, Metsovo.

Through his initiative, many economic and social activities of public benefit came into being and flourished, contributing to the development of Metsovo and its neighboring countries. As the driving force of the Baron Michael Tossizza Foundation, Averoff supervised the construction of over 100 schools in the prefecture of Ioannina, and founded a Students' Hall of Residence in Athens where students from the district of Epirus stay free of charge.

In Metsovo he founded the Tossizza Museum, the ski centre, a model cheese-making industry, a wood working factory, and a centre for the sale of folk art and handicrafts.

His goal was to encourage all activities which would help to preserve the traditions and the economic vigour of the community.

Towards the end of his life he created the Evangelos Averoff-Tossizza Foundation which he endowed with his significant collection of Greek paintings of the 19th and 20th century. The collection is housed in the modern three-storey building of the Averoff Gallery, which was built in accordance with the traditional style of the area, since the preservation of the traditional architecture was one of the aims permeating all of the works implemented in Metsovo.

Katogi Wine was the only one of Averoff's activities in Metsovo which did not operate on a non-profit basis but had the form of an enterprise. However, the roots of the enterprise lay in a vision which occupied Averoff no less than his other creations. And indeed, at the age of eighty, he left the world while still writing The Vineyard of the Humble Saint, a literary account of his vision and of the creation of the Katogi Wine.