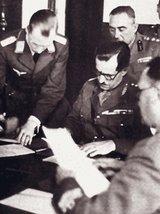 Gen. Tsolakoglou signs the surrender to Germany in WWII

Georgios Tsolakoglou was a Greek military figure and Axis-appointed Prime Minister during the German occupation of the country.

Tsolakoglou was born in April 1886, in Rentina, Karditsa prefecture and entered military school. He saw action during the Balkan Wars, World War I, the Ukraine Expedition and the Greco-Turkish War (1919-1922).

When the Second World War broke out, Tsolakoglou commanded troops on the Epirus front. He was the general who signed the surrender of the Greek forces to the Germans. The Germans then appointed Tsolakoglou to head a Greek "quisling" government on April 30, 1941. Archbishop Chrysanthos of Athens preferred to resign rather than swear in the new government and was later replaced by Archbishop Damaskinos.

After the war, Tsolakoglou was tried for treason and condemned to death. His penalty was commuted to life imprisonment. He died on May 22 of 1948.