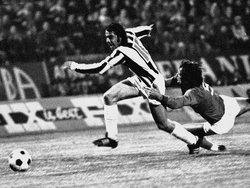 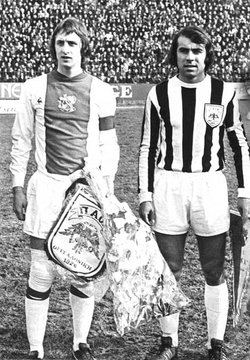 Giorgos Koudas with Johan Cruyff in a 1973 friendly game

Giorgos Koudas - 504 game appearances for the team of PAOK 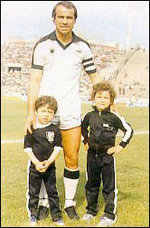 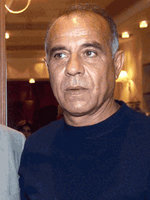 Born November 23, 1946, Giorgos Koudas was the last of the "great" players of Greek soccer, nicknamed the Μεγαλέξανδρος (Alexander the Great) of Greek football. He was certainly one of a very small elite of players as far as skillful soccer talent goes. A virtuoso of the ball, he was established as a potent forward but soon developed also as a player who could organize the whole game for a team.

After the 1965-66 season, Koudas decided to move to Olympiakos. PAOK, however, would not acquiesce to the transfer so the player was forced to sit out one season as was the rule back then. On August 16, 1966 Koudas made his debut with Olympiakos in a friendly. PAOK reacted immediately urging all clubs to refuse to play against Olympiakos should they field Koudas. Sports general secretary Costas Aslanidis' stepped in, banned movement of players between big clubs and forced Koudas to return to PAOK.

Koudas remained with PAOK for the rest of his career and was the captain of the club when the Thessaloniki outfit won their first Greek Championship in 1976 and their first two Greek Cups in 1972 and 1974.

He now is PAOK’s consultant of football and represents the club in official events (as mister PAOK).