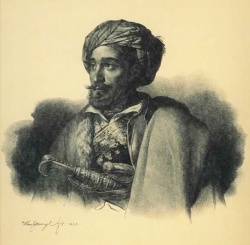 Ioannis Makriyannis was a hero of the Greek War of Independence (1821 - 1829), a writer whose memoirs give us a valuable view of the war and a protagonist of the democratic reforms that took place after liberation.

Makriyiannis was born Ioannis Triantafyllodimitris at Lidoriki, Central Greece, in 1797. He lost his parents at a very early age and became a klepht. In 1820, he was initiated into the Friendly Society that was planning the liberation of Greece from Ottoman yoke.

In 1821, the Greek War of Independence broke out. Makriyiannis took part in many battles and by 1824 became a general of the revolutionary army. When in June 1825, Ibrahim Pasha attacked Myloi, near Argos with a force of 4,000 foot-soldiers and 600 cavalrymen from his regular army, Makriyannis, together with Dimitrios Ypsilantis, Konstantinos Mavromichalis and 300 men, defended the position, which commands the approaches to Nafplio. They had already repulsed four fierce attacks by Ibrahim when, towards evening, they were reinforced by a detachment of the first regular Greek regiment. Its arrival decided the outcome of the battle and the Turko-Egyptian forces retreated in great disarray, with heavy casualties. The gallant Makriyannis, who was wounded in the fighting, was invited aboard the French Admiral Henri de Rigny's frigate, where he was received by the admiral.

Makriyiannis distinguished himself again in the defence of Athens and other battles of the war.

After liberation, Makriyiannis remained in public life. He became a member of the Athens city council and opposed King Otto for his undemocratic practices. On September 3, 1843, he led the revolt that finally secured a constitution for Greece, limiting the powers of the monarchy.

Illiterate most of his life, Makriyiannis learned to write quite late in life and wrote his memoirs which gives us a valuable insight not only into the battles of the War of Independence but also into the rivalries between Peloponnesians and Rumeliotes and the suffering of the civilian common people during the struggle.

Makriyiannis died in Athens on April 27, 1864. The section of the city where he lived is known as "Makriyianni" in his honour.