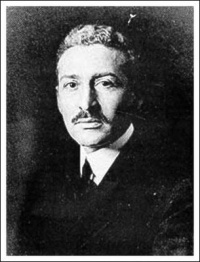 Ion Dragoumis was a Greek diplomat, writer and nationalistic activist.

Dragoumis was born in Athens on September 2, 1878, the son of politician Stephanos Dragoumis who was Foreign Minister under Charilaos Trikoupis. He studied law at Athens University and, after 1899, entered the diplomatic branch of the Greek Foreign Ministry. In 1897, he enlisted in the Greek Army and fought in the Greco-Turkish War.

In 1902, Dragoumis was made Deputy Consul in the Greek consulate at Monastir (Vitolja). In 1903 he became head of the Consulate at Serres and later went on to serve in Philippoupolis (Plovdiv), Pyrgos (Burgas), Alexandria and Dede-Agach (Alexandroupolis). In 1907 he was assigned to the Embassy in Constantinople.

Ion Dragoumis became instrumental in the Macedonian Struggle assisting his brother-in-law, Pavlos Melas, until the latter's death in 1904.

In 1909 the Goudi Revolt broke out and his father became Prime Minister of Greece, however, the force behind the new Prime Minister was Eleftherios Venizelos.

When the First Balkan War broke out, Dragoumis travelled to Thessaloniki as an attache to Crown Prince (later King) Constantine.

In 1915, Dragoumis resigned from the diplomatic corps and entered Greek politics as an independent. He was elected to Parliament from Florina. In that same year he was exiled to Corsica as a result of his disagreement with King Constantine I who refused to enter World War I eventhough the Bulgarian Army occupied a large part of eastern Macedonia.