Born in 1942 in Ierapetra, Crete, footballer Petros Vouzounerakis first played at age 13 at the local level game between Thiella Ierapetra (Θύελλα Ιεράπετρας) vs. Agios Nikolaos AC (Α.Ο. Αγ. Νικολάου). At age 16 he went on playing for Diagoras Ierapetra (Διαγόρας Ιεράπετρας). In 1959 he went on his own to try out for OFI and was cut by then coach Mantalopoulos. Kostas Papoutsakis brought him to OFI again in 1960, where Petros plays on loan from Diagoras Ierapetra for the 1960-61 season. In 1963 while he was serving in the Navy, Olympiakos (under coach Vangelis Chelmis) made an offer that was considered outrageously high at the time. They offered Diagoras Ierapetra 600,000 drachmas for Petros Vouzounerakis. However the President of the club was partial to Panathinaikos - the Vice President favored AEK. Petros Vouzounerakis ended up going nowhere (that year AEK had to settle with signing some unknown fellow by the name of Mimis Papaioannou... ). 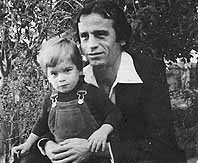 Petros with his son.

Petros started playing football less and less. Eventually OFI acquired him in 1964 for 25,000 drachmas! That's when his football carrier took off! Within 8 years he scored 105 goals (84 goals while in B Division 1965-68 and 1972; 21 goals in A Division from 1969-71). Panathinaikos show an interest for him in summer of 1969. But then government official, Secretary General of Athletics, Mr. Aslanidis steps in and does not allow the transfer (Panathinaikos went on to sign Antonis Antoniadis in the striker position).

Lakis Petropoulos, then coach for the Greek National Football Team, brought him in the international arena for the first (and only) time (October 28, 1970) when he stepped in as a replacement for Michalis Kritikopoulos (Spain-Greece 2-1).

In 1972 Petros Vouzounerakis joins PAOK after the request of PAOK's coach Les Shannon. October 29, 1972 he sustains a shoulder injury in a game against Panathinaikos (mid-air collision with Anthimos Kapsis). He returns to practice after about a month. The Saturday (December 16) before PAOK's game against Kavala FC, he is injured again in the same spot after a collision in practice (with fellow player Chatziantoniou).

That injury signaled the end of his career and the A Division level. He returned to Crete and went on to play with Club of Friends of Ierapetra (Ο.Φ. Ιεράπετρας). He later became the coach of the team.