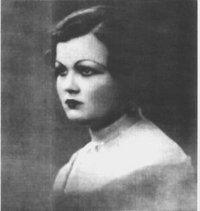 Rita Abatzi (or Abatsi, or Ambatsi) was born in Halka Bounari, Smyrna in 1903. She came to Greece as a refugee in 1922 with her mother Stella and sister Sophia Karavali (also a singer). Rita's father was lost during the burning of Smyrna in 1922.

Very little is known of Rita's early years. it is stated that in or around 1930-1931, Rita attended a wedding in her neighberhood. The musicians there included Stellakis Perpiniadis and Kostas Nouros. Rita sang a song and stunned the musicians with her excellent interpretation. However, Rita did not begin to record until 1932. She went to record over 300 sides in the 1930s, with all the major composers and musicians of the day. Among the styles of song, she made masterful recordings of Rembetic, Smyrnaic, Amanedhes, Demotic and Nisiotika (island) songs.

For reasons unknown, Rita did not record after the war, although she appears to have recorded a couple of sides around 1960. Rita's deep, rich voice and her outstanding variations and slurs were truly unique and she was not forgotton by the public post World War II - as her discs remained in the record catalogues and were re-pressed for many years (and regularly appear on Cds today).

Rita married Yianni Tsipari, but this marriage ended in divorce. She then married a santouri player called Stelios Kritikos, and had two children. She lived in Aegaleo, a suburb of Athens.

Roza Eskenazi and Rita were the most popular Greek female singers and dominated Greek music in the 1930s. The record companies released many 78RPMs with Roza and Rita back to back. Roza remembered Rita very fondly when she was interviewed in 1972, and said they were friends but fought 'like cat and dog' for the best songs in the 1930s. As there is many cases of the same rebetika songs recorded and released by different artists in the 1930s, Roza meant they fought over who would first premiere release of a particular song. Roza also said that she had paid a visit to Rita shortly before she died.

Both Roza and Rita Abatzi stand today as the best exponents of their particular art.