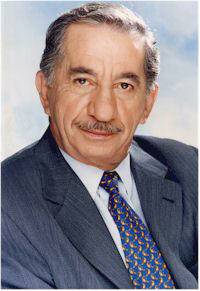 He was hospitalized in intensive care on November 22, 2008 with severe breathing problems as a result of lung cancer. He was a longtime chain smoker. He died on December 12, 2008 and was buried three days later at Deftera Cemetery. His funeral, conducted by Archbishop Chrysostom II, was attended by president Dimitris Christofias and his entire cabinet, PM Kostas Karamanlis and FM Dora Bakoyannis, representing the Greek government; Giorgos Papandreou and Georgios Karatzaferis from the opposition parties. The eulogy was delivered by veteran politician Vasos Lyssarides. No Turkish Cypriot official attended.

In the wee hours of the morning of December 11, 2009, just one day before a scheduled 1-year memorial service, the remains of Papadopoulos were stolen from Deftera Cemetery. They were found late on March 8, 2010, buried in a different cemetery, after an anonymous tip to the police.

In the late fifties, Papadopoulos was active in PEKA, the political section of EOKA. In the run-up to Cypriot independence, he was named minister of the interior at age 25. After independence, he became minister for employment.

He took part in the London Conference in 1959 and was one of the two delegates (besides the AKEL delegates) who voted against the signing of the London and Zurich Agreements. He was also one of the four representatives of the Greek Cypriot side at the Constitutional Commission which drafted the Constitution of the Republic of Cyprus.

He served as advisor to the first representative of the Greek Cypriot side in the intercommunal talks, Mr. Glafkos Clerides, until April 1976 and subsequently he took up that post himself, serving until July 1978.

He represented Cyprus at many international conferences, particularly the annual congresses of the International Labour Organisation (ILO).

Furthermore, he represented Cyprus at the United Nations and the Council of Europe. Until his election he practiced law in Lefkosia.

He campaigned for the 2003 presidential election on a platform that he would be able to secure better deal over the Cyprus dispute than the incumbent Glafkos Clerides. He was backed by not just his own party, Democratic Party, but also the socialist AKEL and social democrat KISOS. 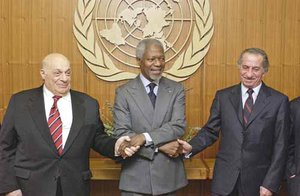 As President, he signed the accession of Cyprus to the European Union on April 16, 2003 in Athens. Cyprus became a full member of the EU on May 1 of the following year.

Before the Cyprus reunification referendum, 2004 on the Annan plan, he urged Greek Cypriots to vote No, declaring "I received a state; I will not deliver a community". His recommendation is considered one of the reasons for the referendum's negative result on the Greek-Cypriot side.

Papadopoulos was defeated in his bid for reelection in 2008. He placed third behind DISY-supported Ioannis Kasoulidis and AKEL chairman Dimitris Christofias.