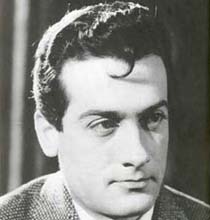 Alekos Alexandrakis was a Greek stage and screen actor.

Alexandrakis was born on November 27, 1928, in Athens to a lawyer father who hailed from Mani in the Peloponnese. He studied in Naval Officers School but passed a test at the Royal Theatre and took up acting.

Alexandrakis' first performances in the theatre drew rave reviews and soon the young actor was offered movie roles by Finos Films. His charm soon captivated the female audiences and his career at Finos lasted 25 years.

Alexandrakis' first marriage was to Marge Valvi whom he met on a tour of Sudan. The couple lived in Athens over the next three years. Then, Alexandrakis met and married Claude Chabadou, a French woman. This second marriage also lasted three years. In 1956, he married his third wife, Greek actress Aliki Georgouli with whom he co-starred on the stage, however, this marriage also broke up after only four years. His fourth marriage was to Swisswoman Verena Gauer. Over the next five years, the couple had two children but that marriage also ended in divorce.

In 1969, Alexandrakis met Nonika Galinea with whom he fell deeply in love and stayed with her for the next 25 years. In 1996, he returned to the National Theatre and, in the latter part of his life, starred on Greek TV.

The popular jeune premier passed away at 18:15 CET on Tuesday, November 8, 2005 in Sotiria Hospital from kidney and circulatory failure. He had been admitted to hospital on October 9 suffering from serious respiratory problems. His health condition deteriorated fast.