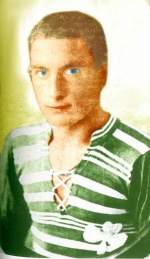 Angelos Messaris is widely regarded as Panathinaikos' best pre WW II player. He was born in Cape Town, South Africa, in 1910. His playing career in Greece lasted four years as he returned in 1931 to South Africa, however, during that period he became a fan favourite. He was part of the team that demolished Olympiakos 8-2 and he scored the second and the third goal.

He was capped 4 times by the National Football Team of Greece, scoring 2 goals.