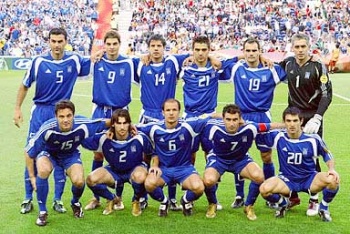 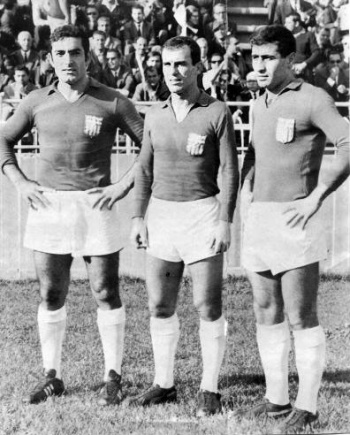 Greece's first appearance in a major tournament was the 1980 European Championship, but their first win in a major tournament did not come until the first match of Euro 2004, a 2-1 win over the hosts Portugal. The Greeks went on to win the tournament, stunning defending champions France in the quarterfinals and the heavily favored Czech Republic in the semifinals before beating Portugal a second time, 1-0, in the final. Bookmakers were giving odds of about 80-1 to 150-1 for the Greeks before the tournament.

The Greeks' victory in Euro 2004 sent them skyrocketing up the FIFA World Rankings from 35th before the event to 14th in the July 2004 rankings. This is believed to be the largest upward move ever by a team in a single month within the top echelon of the rankings; there have been larger month-to-month moves, but by teams considerably further down the table.

The Euro 2004 winners were selected as World Team of the Year at the 2005 Laureus World Sports Awards.

Greece qualified for Euro 2008, in Switzerland and Austria, by accumulating the greatest number of points of any team in their qualifying matches. However, they finished last in Group D of the finals and were eliminated from further play.

Greece qualified for World Cup 2010, in South Africa, after a playoff victory against Ukraine (0-0 in Athens, 1-0 in Donetsk). They recorded their first victory ever in the finals of the 2010 World Cup - a 2-1 win over Nigeria.

Greece again qualified for World Cup 2014, in Brazil, via the playoff route, this time against Romania (3-1 in Piraeus, 1-1 in Bucharest). This time they managed to take second place in their group and qualify for the knockout phase (Round of 16) where they lost a penalty shootout against Costa Rica. The regulation time score was 1-1.

During the opening ceremony of Euro 2004, which took place right before the match of Portugal vs. Greece, the hosts used the replica of a 16th century ship referring to the portuguese expeditions of that time. The Greek radio sports journalist Georgios Helakis commented that "since the portuguese team appear in such ship, it's time for us to become pirates and steal the victory". This nickname was repeated at every win, and especially after the final match (again vs Portugal). After Greece won the trophy, The Pirate Ship is the nickname of the Greek team.