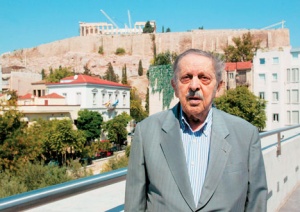 Apostolos "Lakis" Santas was a member of the Greek Resistance.

Santas was born on February 22, 1922, in Patra to parents who were originally from the island of Lefkada. The family moved to Athens while Apostolos was still young.

Santas entered law school at the University of Athens but his studies were interrupted by World War II and the occupation of Greece by the Germans. On the night of May 30, 1941, along with Manolis Glezos, Santas climbed the hill of the Acropolis and took down the German flag as a gesture of defiance and resistance to the foreign occupiers. He later enlisted in EAM and fought with ELAS in the resistance movement.

After liberation in 1944, Santas was exiled for his leftist beliefs to Ikaria and later interred in the concentration camps of Makronisos. He left Greece and received political asylum in Canada, where he lived until 1962. In 1963, he returned to Greece.