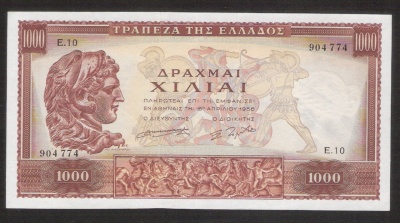 Drachma, pl. Drachmas or Drachmae (δραχμή, pl. δραχμές or Δραχμαί) is the name of both:

The name Drachma is derived from the verb "δράττω" (dratto, to grasp). Initially a drachma was a fistful (a "grasp") of 6 oboloi, sticks of metal used as currency as early as 1100BC.

The 5th century BC Athenian tetradrachm ("four drachmae") coin was the most widely used coin in the Greek world prior to Alexander the Great. It featured the helmeted profile bust of Athena on the obverse (front) and an owl on the reverse (back). In daily use they were called γλαύκαι glaukai (owls), hence the phrase Γλαύκ’ Αθήναζε . The reverse is featured on the national side of the Greek 1 euro coin, see Greek euro coins.

After Alexander the Great's conquests, the name Drachma was used in many of the Hellenistic kingdoms in the Middle East, including the Ptolemaic kingdom in Alexandria. The Arabic unit of currency known as dirham (in the Arabic language, درهم), known from pre-Islamic times and afterwards, inherited its name from the drachma; the dirham is still the name of the official currencies of Morocco and the United Arab Emirates. The Armenian dram also derives its name from the drachma.

The drachma was also used in Ancient Rome in the 3rd century BC. It is difficult to give even comparative values for money from before the 20th century, due to vastly differing products, but in the 5th century BC a drachma had an estimated value of 25 1990 dollars. Classical historians regularly say that in the late Roman Republic and early Roman Empire, the daily wage for a laborer was one Drachma.

The drachma was reborn in 1832, soon after the establishment of the modern state of Greece. It replaced the phoenix at par. In 1868 Greece joined the Latin Monetary Union and the drachma became equal in weight and value to the French franc. During the German occupation of Greece (1941-1944), catastrophic hyperinflation and Nazi looting of the Greek treasury made the drachma practically worthless; in 1944, old drachmae were exchanged for new ones at the ratio of 50,000,000,000 to 1. The new currency was soon devaluated again; in 1953, in an effort to halt the slide, Greece joined the Bretton Woods system. In 1954 notes were again exchanged for new ones, at a ratio of 1,000 to 1; the new notes were pegged at 30 drachmae = 1 US dollar.

In 1973, the Bretton Woods System was abolished; over the next 25 years the official exchange rate gradually declined, reaching 400 GRD = 1 USD.

1 Minted, but rarely used. Usually, prices were rounded up to the next multiple of 10 drachmas.

Minae and talents were never actually minted: they represented weight measures used for commodities (e.g. grain) as well as metals like silver or gold