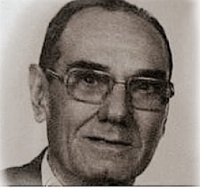 Ezekias Papaioannou was a Cypriot politician and Secretary General of AKEL.

Papaioannou was born in 1908 in the village of Kelaki, Lemesos province and studied at the American Academy of Larnaca.

In 1936, he was part of a contingent of 60 Cypriot leftists who volunteered to fight in the Spanish Civil War as part of the International Brigades.

Papaioannou returned to Cyprus and got involved in local politics becoming Secretary General of the Progressive Party of the Working People (AKEL) in 1949. He held the position until his death on April 10, 1988.